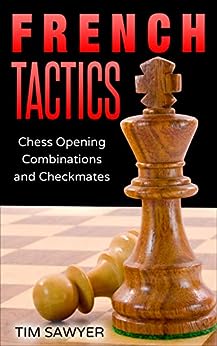 French Tactics gives you 500 positions from actual games that use combinations and checkmates in the French Defence as White or Black. This book helps you see positions where you can to win, or show what to look out for if you’re playing the other side.
French Defence chess games begin 1.e4 e6 and often 2.d4 d5. Many masters play the French most of the time. Covered are the Winawer 3.Nc3 Bb4, the Classical 3.Nc3 Nf6, the Steinitz 4.e5, the Rubinstein 3.Nc3 dxe4, and the Tarrasch 3.Nd2. Bishop moves 3.Bd3 and 3.Be3 are included along with early offbeat second move options 2.f4, 2.b3, 2.c4, 2.Qe2, 2.Nc3, and 2.d3.
The French encourages you to turn strategical advantages into tactical victories. When you run toward tactics, you run toward success. Tactics help you to attack and defend accurately. This book shows winning positions played by masters throughout chess history with dozens of games that were played in 2020.
If you’re good at tactics, you’re good at chess. Opening theory may help you start well. Endgame knowledge may help you finish well. Tactical skill helps you win games and avoid losses. Tactics include pins, forks, removing the defender, attacking two pieces at the same time, and threatening to mate your opponent.
The easiest path to tactical success is to recognize patterns that occur frequently in your favorite chess openings. Grandmasters know tactics and can easily slide from one opening to another. Everyone knows a few positions. Here’s 500 in the French. Tactical knowledge helps you to improve your winning chances. Take your opponent’s pieces. Pick off the pawns. Mate the king!
Don’t rely on dumb luck. How can “dumb luck” allow you to win? You can win a few games when your opponent makes dumb moves. That’s when your opponent gives up a piece for nothing. You’re lucky when your opponent fails to defend a mate in one. To advance, you need more than dumb luck. You need tactics.
The author faced the French 1300 times as White after 1.e4 e6, or 1.d4 d5 2.e4 e6, or 1.Nc3 d5 2.e4 e6. He also played it 300 times as Black. The purpose of this book is to illustrate and teach the French Tactics. It is assumed you can read algebraic chess notation. The White pieces are positioned at the bottom of each diagram. Above each diagram note who can move and win. It’s either White to play a tactical move or Black to play a tactical move. Some moves are simple and easy. Others are subtle and tricky. That’s chess – lots of obvious moves and lots of sneaky moves.
Look at each diagram. It’s a key position ready for a tactical win. The final moves are in bold with a brief analysis or comment. Chess engines were used to ensure the accuracy of analysis. Follow the moves in your mind. The skill to visualize each new position without moving pieces improves your tactical strength.
The solid French Defence provides reliable development for the Black pieces after 1.e4 e6 2.d4 d5. White may close the center with 3.e5 or 4.e5 but it rarely stays closed. Strategy indicates the c-file or the f-file can be pried open to increase winning chances. Black attacks against e5, d4, and c3. White uses extra space to threaten the weak points or sacrifice material to win. This book demonstrates strong moves after 1.e4 e6 with a brief comment.
Players may sacrifice a pawn, a piece, or the Exchange to speed up the attack. You make life more difficult for all your opponents when you think tactically about how to attack their weak points. Games are arranged by ECO (Encyclopedia of Chess Openings) coding (C00 to C19) from less popular to more popular moves. Ideas in this book come from the French Defence, but take note: These same tactical patterns work in other chess openings too. Some champions will play the French Defence from both sides.
It’s a good opening for winners. Are you ready to win?
Buy French Tactics and go for the win!

How can I lose a game ‘smooth’ while making 0 blunders??

Interview with Judit Polgár about chess and life